In 2019, the Comunn Eachdraidh Nis Youth Cafe were one of the first organisations to be supported with an award from the CalMac Community Fund. Nine young people engaging in the youth cafe have helped open North Lewis to the world by creating a film, while learning valuable life skills along the way.

'Bòidhchead ar Sgìre' - A tour of North Lewis - is presented in Gaelic by four of the children who explore the natural beauty of the north Lewis area and what there is to do.

The film, which has English subtitles, will be played in the Society's newly refurbished museum at North Dell, the museum is visited by over 20,000 people annually from all over the world.

'For many in the group, this was the first time they had visited many of the historical sites featured in the film. By taking part in the filming, they realised the richness and importance of the history of their own area,' said Comunn Eachdraidh Nis's Community Engagement Officer, Donna Dorris. 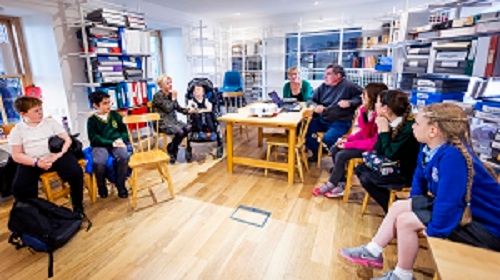 CalMac's Head of Service Delivery (North), Finlay MacRae said: 'This has been a great project in bringing together young people living in isolated communities. It really helped to build new friendships and foster a sense of community among the next generation in Ness. This is exactly the type of outcome we want to see achieved through our Community Fund.'

'From aged 11 onwards, the children in North Lewis travel to Stornoway to attend high school. This makes it a challenge for them to find time to engage with their community. By bringing together this group of children, they got the chance to work together on a collective project which will have a lasting impact in their community,' added Donna.