Three Isles Tour - score a hat-trick in just one day! 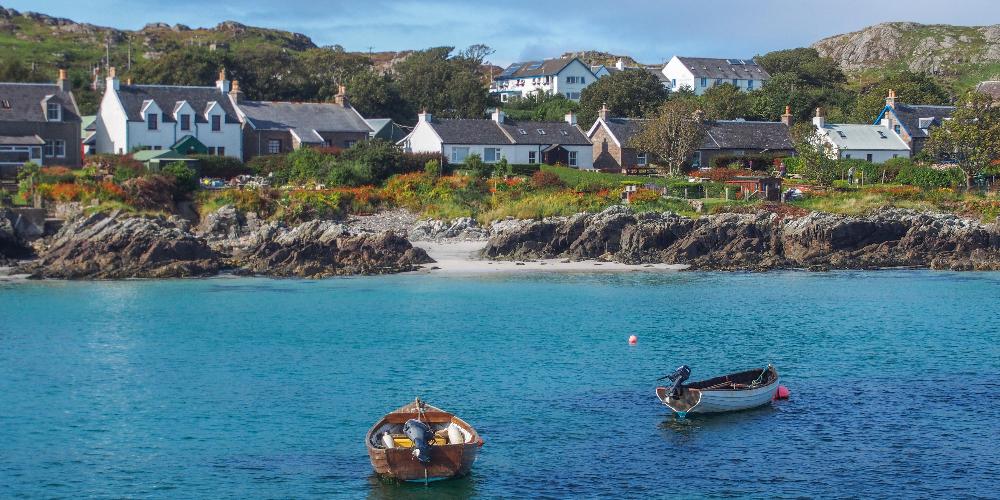 Visiting some of Scotland's most inspiring islands need not involve an exhausting expedition over land and sea, when a selection of the most special are literally next door neighbours. In fact, in the non-existent sport of island-hopping, you can score a hat-trick in just one day on a tour which begins on the mainland.

The Three Isles Tour, featuring Mull, Iona and Staffa, is brought to you by CalMac Ferries, West Coast Tours and Staffa Tours . Proof that three really is the magic number.

My island adventure started as many do, in Oban - the gateway to the Western Isles. The ferry journey from Oban to Craignure on the Isle of Mull takes just 45 minutes and is definitely not one you should be spending indoors.

I admired the coastal trinkets scattered along the route from out on deck, with every gust of wind and breath of fresh, salty air setting the scene for a day of island exploration; watch out for Dunollie Castle, Lismore Lighthouse, Duart Castle and a number of enviable properties which could feature on 'Grand Designs'.

The shores of Mull are soon within sight, with densely green hills which rise beyond the coast and its pretty little inlets. I hadn't even set foot on Scotland's third largest island, and I could already tell that she's an island which wears scenery very well. I bet she has a good story too, I thought. I was about to find out.

Two pillarbox-red West Coast Tour buses sat outside the ferry terminal, beckoning myself and fellow Three Isles Tour passengers to take our seats and brace ourselves for a journey of natural wonder and scenic stimulation. I was ready. 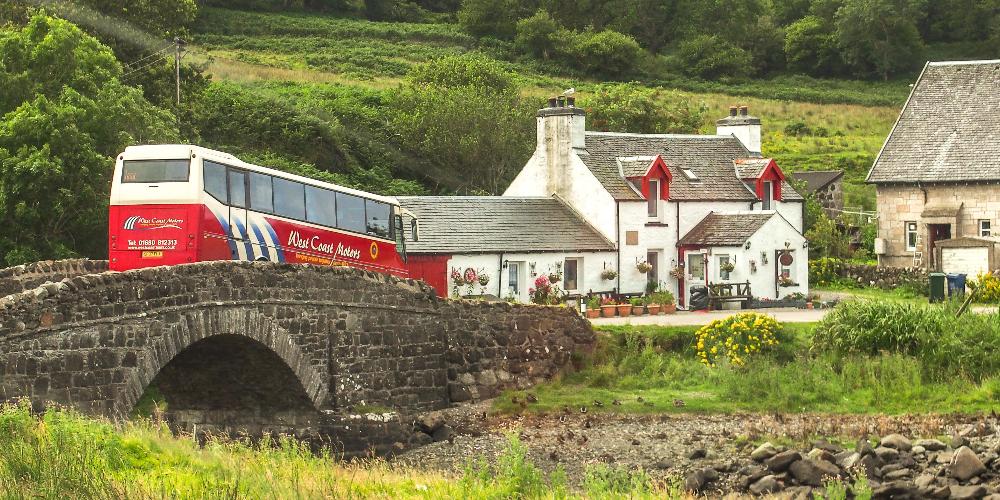 While there is no allocated time to explore Mull on foot, the bus journey from Craignure to Fionnphort - the pocket-sized port which serves Iona and Staffa - is an appetiser in island life. It's almost as if the curly-wurly roads were designed with tourists in mind; the reduced speed on tight corners allowed for maximum appreciation of the surroundings and ample time to enjoy the accompanying stories.

I was lucky to have Sheila, of the Three-Isles-Tour-video fame, as my driver/guide on this section of the trip. Sheila imparted her expert knowledge of the island with an irrevocable passion, and lullaby-like voice. I'd happily hire her to tell me stories of Scotland's past before bedtime!

Organised tours are invaluable thanks to the local and personal perspective that the guides bring to the experience. Sheila pointed to distance lochs, regaling us with stories of hikes with her husband and pit-stops at a well-stocked and completely remote honesty shop; this common system of kindness and trust is my favourite island tradition.

We passed the award winning Inverlussa Mussel Farm, where locals stop by to pick up 2kg of their famed clams for just £2. Aside from celebrity-status seafood, the landscape en route to Fionnphort shamelessly flirts with anyone who will watch. Ben More - Mull's only munro - sat majestically wrapped in a scarf of clouds above the surrounding hills, while a rainbow plunged into Loch Scridain. It was easy to see why Sheila appears to be permanently in the honeymoon period with Mull!

A couple of tiny towns later, we had passed standing stones which once led pilgrims to Iona, and were now at pretty Fionnphort. Jumping off the bus, I could see Iona over the water. I wasn't to grace her shores just yet however. 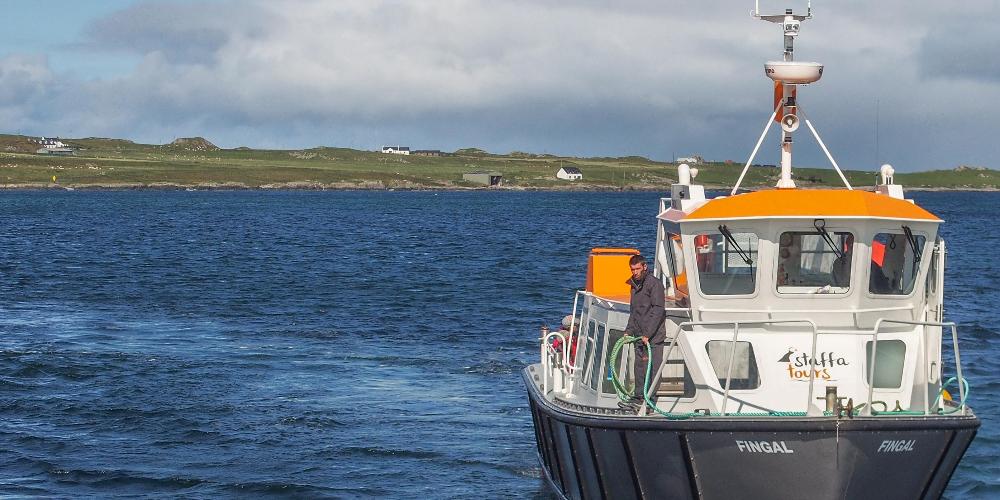 We hadn't even climbed aboard yet and I was already sold on the cute wee boat with a cartoon puffin emblem. The size and intimacy of this boat ride screamed 'adventure'; I knew I would be in my element.

Despite the lingering rain clouds, I immediately claimed a spot on the top, open deck. I was soon subject to diagonal rain in my face, and I didn't care. The views back to Mull's dramatic coastline, the sneak preview of Iona, and all of the little clusters of islands in between, may have played a part in my nonchalant attitude.

Staffa needs no introduction. Once your eyes have fixed on this iconic natural spectacle, there's no mistaking it for any other island. The vertical columns which fringe the island are carved by the complex cooling of ancient lava flows which came into contact with the rock. They are unlike anything I've seen before, or will ever see again. 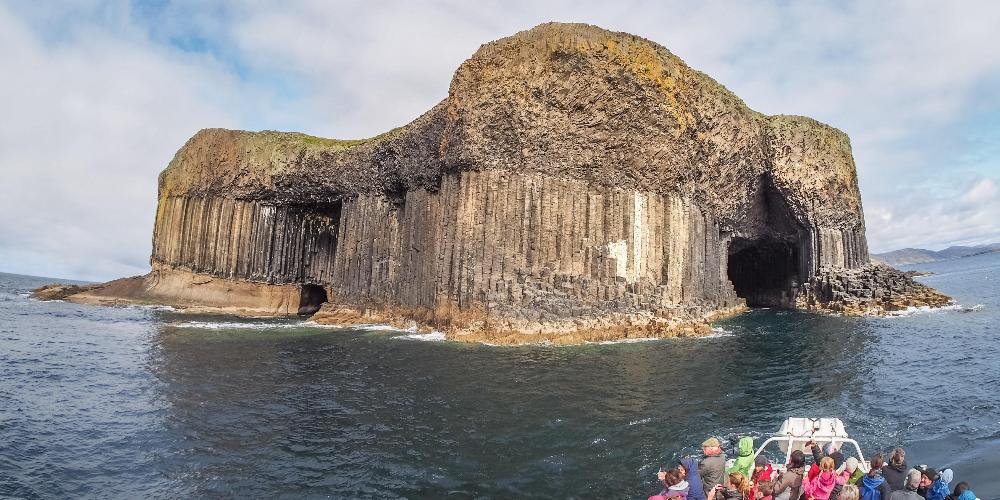 The alluring entrance to Fingal's Cave is visible on approach to the island, prompting our guide to introduce the story of mythical giants and their legendary rivalry. Blue skies welcomed us to land on the island, with plenty of time given to explore the high ground and Fingal's Cave.

I was completely transfixed by the island's jutting peninsulas, translucent water, sheer cliffs and unbelievable rock formations. Staffa far surpasses any structure which could ever be built by human hands. Nature 1 - 0 Mankind.

The only thing missing from Staffa on this visit was the adorable posse of puffins, who I missed by just a few weeks. Spring and summer are perfect to get up close to these endearing creatures. I'll definitely be back. 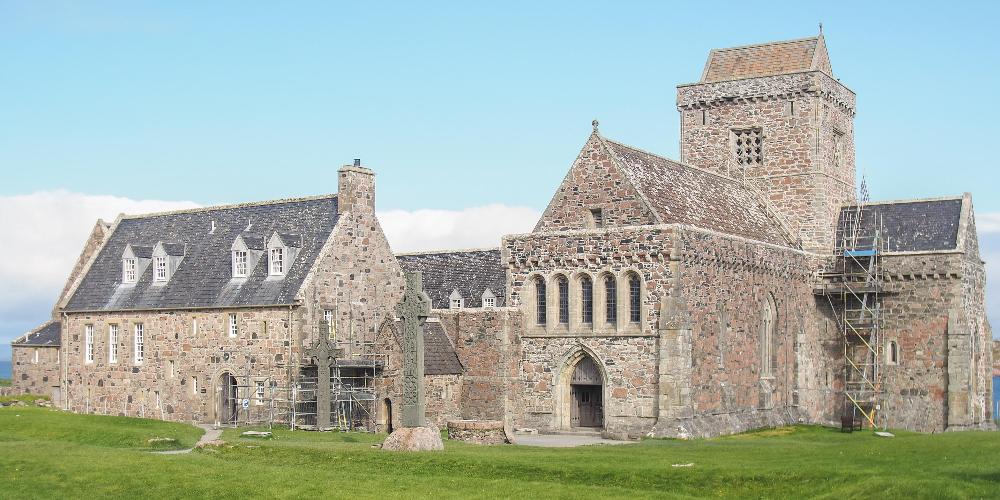 The third and final island-fix of the Three Isles Tour comes in the shape of the little beauty that is Iona. Our Staffa Tours boat took the 30 minute journey back from Staffa passing the focal point of the island on the way - Iona Abbey - before arriving into the picturesque port.

Having not eaten since breakfast, most of our group made a beeline for Martyr's Bay Café next to the port. One bowl of local mussels, a slice of chocolate cake, and plenty idyllic views later, I set off on foot towards the abbey via the Iona Nunnery ruins.

The abbey itself was established in 1200, attracting pilgrims from around the world to visit St Columba's tomb. St Columba arrived on the island in 563AD, establishing Iona as the centre of Christianity. Whether you are religious or not, the island which is just three miles by one and half miles, has been an important place of gathering for over fourteen centuries, and still is today. It really is the sacred heart of Scotland.

Home to just 120 residents, the island welcomes around 130,000 visitors per year; some for religious visits or yoga retreats, and others to simply be immersed in the outdoor tranquillity. I didn't have sufficient time to do the island or the abbey complete justice, but again, this just adds to my list of reasons to return to all three islands. 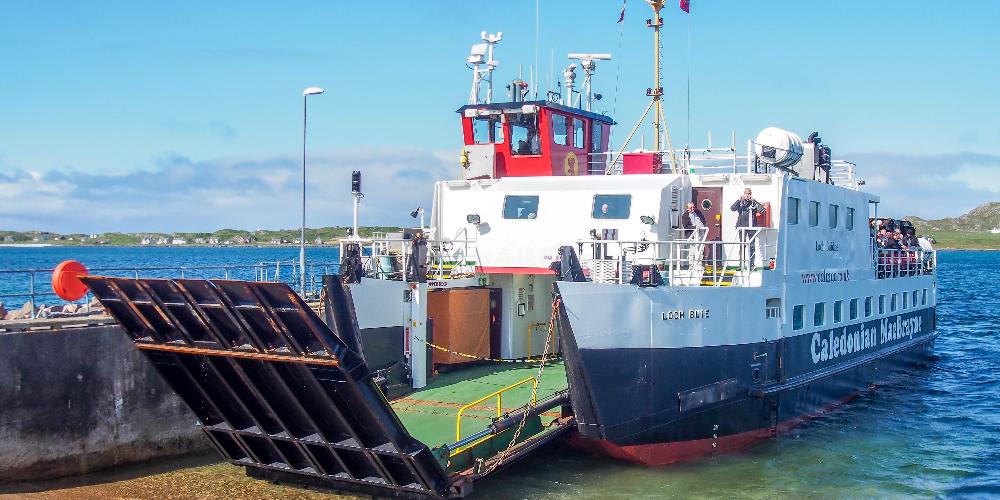 I still have trouble putting into words the way I felt when I arrived on Iona, and when I sadly had to leave on the ferry back to Fionnphort. I was truly overwhelmed by its immense beauty and peacefulness.

Back on the bus, we returned with Sheila to Craignure for the ferry back to Oban, but not before passing another rainbow. Indeed, a perfect way to end the day.