Primary school pupils on Cumbrae are set to get a taste of a career in broadcasting thanks to support from CalMac's new Community Fund.

Cumbrae Community Radio has been given an award to develop a Broadcasting Production Primary Education project.

Around 70 island pupils will learn how to develop, record and broadcast radio shows and is set to become a core part of the Cumbrae Primary School's curriculum.

The award will enable station to provide equipment and facilities at the school so pupils can work with their teachers to develop, prepare and record their own shows, which will then be broadcast across the island.

'A community is stronger when working together and thanks to the Calmac Community Fund. We are now able to introduce a fun and exciting way for the children of Cumbrae to learn about Broadcast and Media Production. With the funds we were awarded we plan to build a full working Mock radio station with recording abilities where teachers can select members from each class to invent and record their own radio show. They will also be taught how to replace broken components and fix tech issues that may arise. The project will see members from Cumbrae Community Radio working with the teachers to ensure they have a full understanding of the system.

'A previous project last year saw the kids grow more confident in themselves and helped them to work as a team. Unfortunately due to location of the radio station it meant it was a one off. Now thanks to Calmac Community Fund we can now take this experience to the school.' 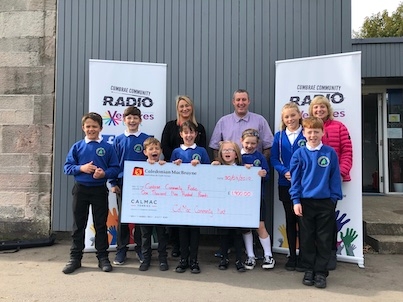 Picture shows: Cumbrae Community Radio and some of their young broadcasters pic up their Community Fund cheque.

So far the Fund has supported 39 projects across west coast communities.

'The response since we made the first round of awards earlier in the year has been fantastic.  We are already seeing the awards put to good use in the Western Isles and I'm delighted that we will be able to introduce pupils on Cumbrae to the world of broadcasting. Having the opportunity to actually get involved in the production of a radio show is a fantastic opportunity to learn new skills. Skills that will stand them in good stead whatever career path they choose,' said CalMac's Director of Community and Stakeholder Engagement, Brian Fulton.

Each application was judged by a screening panel of young people recruited from across the company's network, in partnership with Young Scot.

A project to help inclusiveness on Bute also succeeded in applying for an award. Back on the mainland Gourock Golf Club, Royal Gourock Yacht Club and Ayrshire Children's Services CIC are all also being supported.