Five youth projects across Lewis and Harris have shared in grants of £8750 to help improve facilities and access to services for young people.

One of the first groups to benefit is Lewis & Harris Women's FC who received £1000 to help them play in the newly formed Highland and Islands Women's Football League.

Team coach Euan MacLeod said that thanks to the success of the national team qualifying for the World Cup, women's football is one of the fastest growing sports in the country.

'To take part in the new league we had to agree to play our home games in Ullapool, this means we face logistic problems getting our players to matches,' said Euan.

'Even for training sessions some of our players really struggle to travel from the more isolated communities. This grant will really help open up the team to young women from across the Outer Hebrides allowing us to tap into the full range of potential talent our islands have to offer.' 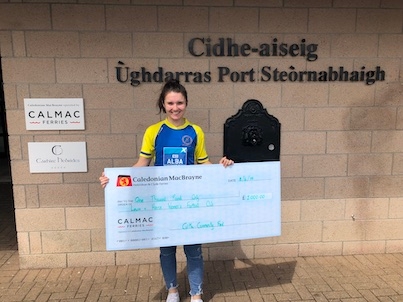 CalMac's Community Fund is open to non-profit organisations involved in activities that will benefit young people aged 26 and under from island or coastal communities the company supports.

'The response since we started taking applications in March has been amazing. We had no idea the variety and creativity of different projects that are going on to help improve the quality of life for young people on the islands we support,' said CalMac's Director of Community and Stakeholder Engagement, Brian Fulton.

'We are delighted to make a contribution to making them a success.'

Other organisations who were successful during this round of awards were Comunn Eachdraidh Nis (CEN) in support of their Comunn Eachdraidh Youth Café, the Western Isles Foyer for their 'Food for Thought' project, Volunteering Hebrides to help with their Embark Project's 'Going Places' young people's group and Lewis and Harris Youth Groups' Association for their CalMac 'Together we go further' project.

Each application was judged by a screening panel of young people recruited from across the company's network, in partnership with Young Scot.

CalMac will now be taking applications from the Southern Hebrides and Firth of Clyde communities from July 1 details at calmac.co.uk/community-fund.