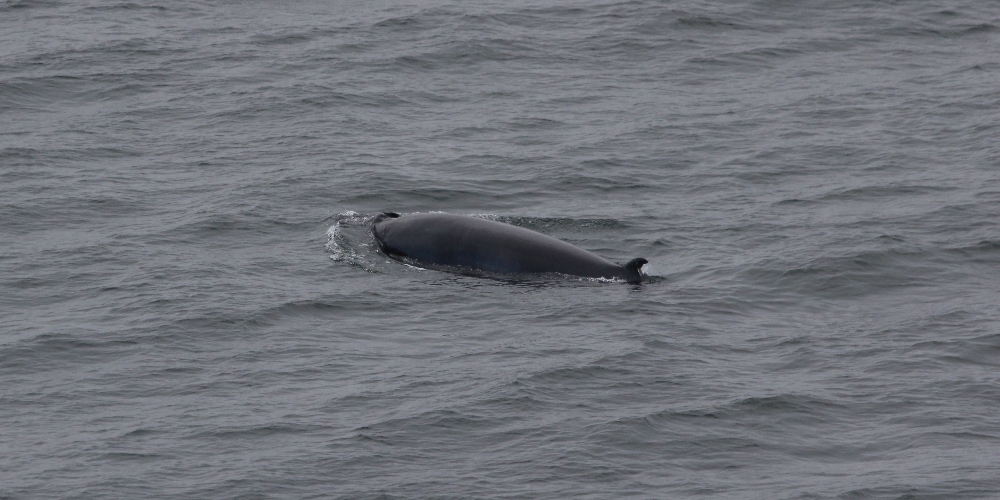 Now I'd like to tell you all about the smallest extant (currently living) baleen whale, this is the minke whale (scientific name: Balaenoptera acutorostrata), the naming of this whale is a good place to start. The story goes that it was named after a whaler called Meineke and this was because he would often confuse these small rorqual whales with the largest of rorqual whales, the blue whale. To mock their colleague and friend shipmates used to say "Aha, looks its Meineke's whale!", and it stuck.

Currently there are three subspecies, the common (northern) minke whale, Antarctic minke whale and dwarf minke whale that inhabit the waters around Australia. They each have key differences such as size, patterning and DNA. As we are in Hebridean waters I am going to stick with the local favourite, the common (northern) minke whale. Firstly, I'm going to elaborate on a few words I've already mentioned, these are; baleen and rorqual. A common minke whale has around 270-325 baleen plates and is made of keratin, the same compound that makes our hair and nails. Baleen plates feel like a bristly brush and are used to sieve food from the huge mouthfuls of water they take. The reason these whales can take huge mouthfuls of water is because of their rorqual pleats. Rorqual pleats are the series of longitudinal folds of skin running from below the mouth back to the naval. They can expand allowing the whales to take in large amounts of water, containing the vital food that they need. 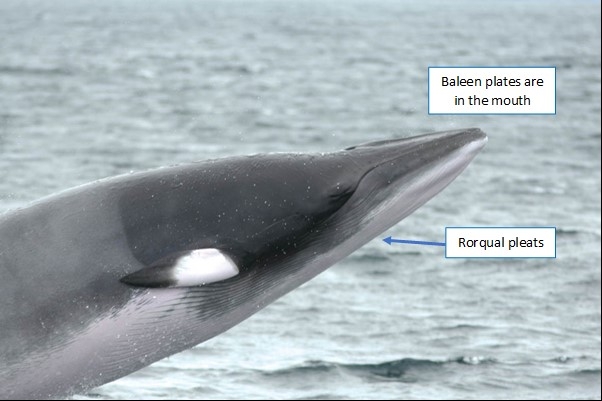 As you can see on the above image the common minke whale has white bands on the flippers, or pectoral fins, these can be used to herd schools of fish into a shoal and engulf large quantities of caloric value, quickly.  In order to gather fish, they swim in circles around a school, decreasing the size of the circle until they are close enough to lunge into the bunched school of fish. Minke whales can also feed on krill. It is due to this very fishy diet the minke whale earned its nickname, 'stinky minky', this is due to its inconspicuous blow being smelt before its seen!

In Scotland, minke whales migrate in great numbers through the summer to feed and breed. Four new Marine Protected Areas (MPAs), one of which spans the Sea of the Hebrides, have been recommended to add to the developing network of sites across Scotland's seas. Scotland's existing network of MPAs consists of more than 217 sites for nature conservation. The network helps to protect nationally important undersea landforms, habitats, geology and marine wildlife including the minke whale. Cabo Pulmo National Park, a protected area near the southern tip of Mexico's Baja peninsula, experienced a 460% increase in its fish population since 1999. Fiji established the Mavana MPA in 2007 on Vanuabalavu Island, researchers recorded numbers of sea cucumbers 10 times higher than previously seen. These success stories show the importance of protected sites in the marine environment.

Not only are the areas important, the monitoring of species and effectiveness of the site must be complete, and CalMac Ferries and ORCA are working together to ensure marine mammals are recorded so we can see where hotspots occur across the Hebrides.

I hope you enjoyed this blog in the fact file series and if you have any questions or comments please get in touch at hebrides@orcaweb.org.uk or on Twitter via @CalMacFerries or @Orca_web.