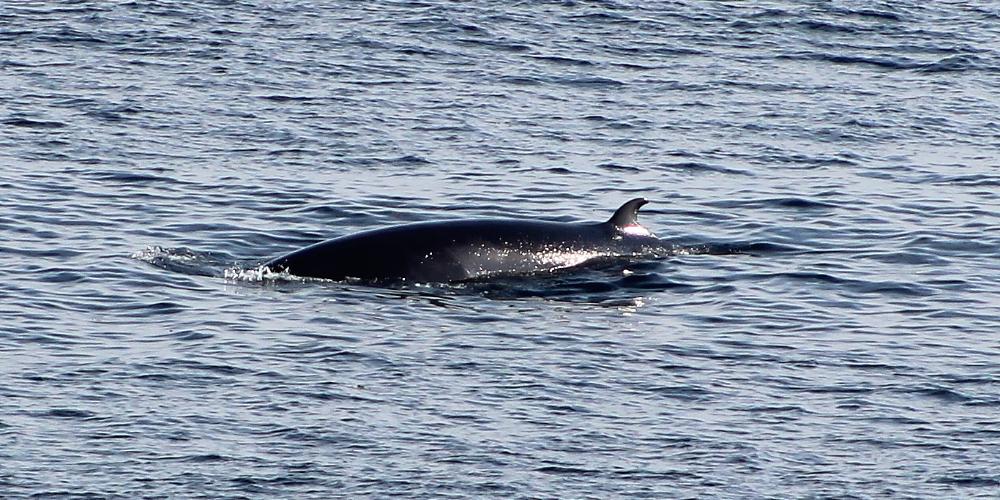 Specially-trained Caledonian MacBrayne crews have taken part in an inaugural nationwide survey of whales and dolphins.

And, during the nine-day survey, a total of 49 whales and dolphins - as well as a lone basking shark - were recorded.

The data captured during the OceanWatch survey was fed through to cetacean (whales, dolphins and porpoises) conservation charity ORCA which has now compiled the figures and locations to further enhance understanding of the animals' distribution around the British coast.

This included two rarely seen Atlantic white-sided dolphins near Rum and multiple sightings of harbour porpoises and minke whales around Eigg. The Firth of Lorne towards Colonsay proved a good spot for both common dolphins and more minke whales.

Further common dolphins and harbour porpoises were spotted by crews as they sailed the Sound of Mull.

The single basking shark was spotted off the south coast of Eigg.

The survey has been introduced this year to open up a new and unique data channel - that of the commercial and professional mariner.

Given its unique daily business of crossing Hebridean waters, CalMac was invited to take part and was only too happy to say 'yes'.

And crews on board MV Lord of the Isles, MV Lochnevis and MV Clansman all stepped forward to be trained by ORCA staff to spot the different types of whales and dolphins and to make notes of the species encountered, as well as co-ordinate plots of locations. Routes included Mallaig to the Small Isles, Oban to Colonsay and Oban to Coll, Tiree and Barra.

"Our Masters and crews were happy to lend their support to the survey," said Guy Dale-Smith, CalMac's Head of Marine. "Our daily business of crossing these stretches of water puts us in an excellent position to be able to help with little additional effort required on the part of our ever vigilant bridge teams and crews.

"We are fortunate to sail through some of the most marine wildlife rich areas in the UK and it's pleasing to hear that our crews made the most of the training given by ORCA and recorded so many whales, dolphin and porpoises - including some which are infrequently spotted around our coasts."

"We were expecting good results in the west coast area from CalMac," said ORCA's Community Wildlife Officer Anna Bunney. "And we weren't disappointed. The west coast of Scotland is a diverse area for whales and dolphins, and the concentration around the Small Isles in particular was impressive.

"My colleague Lucy Babey and I did some training with the bridge crews of the three ferries back in mid-July and they were really enthusiastic. And the crews were quite surprised by just how much you could see when you know where to look and what you are looking for.

"On the training from Mallaig out to the Small Isles in mid-July before the start of the survey period we saw four minke whales and 25 harbour porpoises in a very short time - which was amazing.

"The CalMac sightings are higher than in other areas which took part around the whole of the UK. Given the areas covered and the knowledge we already have about these animals, this is not entirely surprising, but it is also just as important for us to know that our knowledge remains current and there is comfort in knowing that the animals are where we would expect to find them.

"We're really delighted CalMac has taken part in the survey and we were so well looked after by all crew on-board during the training; they really were so welcoming, enthusiastic and interested in our work.  It was an absolute pleasure to sail with CalMac."