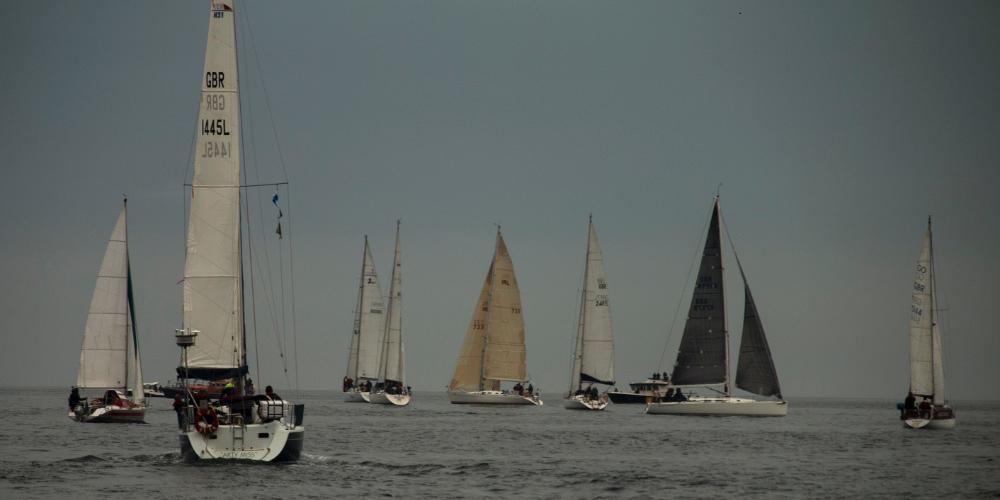 Organised by North Uist's Comann Na Mara, the challenge brought together 27 yachts from all corners of the UK and beyond to a far nook of the Western Isles with a long-held and shared common goal - to reach the alluring, mysterious, rugged cliffs of St Kilda.

Of those 27 boats, 15 of them went in the racing fleet and the remaining 12 cruised in company.

Despite having been at sea for such a prolonged period, it was a nail-biting finish between Grant Kinsman's Sigma 400 Thalia and Port Edgar Yacht Club's Moonstruck.

The fastest boat on handicap, Moonstruck was the only one of the racing fleet to make the return journey in under 24 hours - 22 hours and 59 minutes to be precise. Dublin Bay-based Thalia, meanwhile, sailed in after 24 hours and 31 minutes.

Thus ensued several hours of nervous waiting for the final yachts to arrive and the much-anticipated results - and when they came, they were exceptionally close. In the end, Moonstruck prevailed with a tiny corrected time margin of five minutes and 50 seconds over her rival. An astonishingly tight result after such distance, and so many vagaries of tide, swell and fickle breeze; a real testament to a very long night of grit and determination in some very difficult conditions. And Fraser Gray's First 40.7 Pippa VI from Helensburgh rounded off the top three with a respectable time of 24 hours and 57 minutes.

In all of the hundreds and hundreds of hour of planning which had gone into this short 24 hour race, it had been expected that the yachts would probably have to dig deep to overcome some perilous seas and howling wind - so typical of even summer weather in this notoriously exposed and blasted outpost of the UK. There were strict guidelines in place about how much wind could actually thwart even a start. Inclement weather could have seen the flotilla shorebound while the racers were set free to pit their wits against the elements. They could all have made the journey for nought.

What had not been expected was yachts peaking at a mere seven knots, struggling against a sometimes unpleasant swell, crews toiling from fatigue and occasional seasickness as windless conditions made pacey progress impossible.

"Sailing in conditions like that is much harder than racing hard in heavy weather," said race officer John Readman. "It is very hard work to keep morale up and attention span lively when you are wallowing in the sea like that with barely a breath of air and no real sign of any to come."

Of the 15 racing yachts which started, seven of them judged that discretion was the better part of valour and joined the cruising flotilla - allowing the luxury of switching on the engine. Of the cruisers, just a single one - Sea Fever - actually made the determined journey to St Kilda under sail.

And yet, despite a voyage which had clearly taken its toll and after a well-earned nap, there was universal praise ashore from the participants - both the racers and the cruisers.

In the flotilla, those unknown to one another have now enjoyed an experience which has turned them into friends. For all of them, getting ashore on Hirta - the main island of St Kilda, and the only one which was inhabited - was the stuff of dreams.

Rachel Vejar and her husband Alvaro from Inverness joined Mick and Sally Ineson from Yorkshire on their boat Casares for the journey as part of the cruise in company. The two couples had never met before - Rachel and Alvaro were introduced to Mick and Sally the day before the challenge began. And were invited to join them.

"We tried sailing but there wasn't enough wind," said Rachel. "The boat is a cruiser and without a spinnaker we were hardly getting anywhere.  As the main objective was to land on St Kilda we just motored there.  My husband and I both felt seasick due to the enormous swells, he spend most of the time below deck, but was still really happy to have made the trip.

"We loved the journey, and like many people, going to St Kilda has always been a dream of mine.  It was great to just land on the island and have a walk round."

Her story mirrors that of many others having experienced the grandeur of St Kilda and the pleasure of sailing in company.

Phrases like 'a mission accomplished' and 'a real sense of pleasure and achievement' pervaded across Lochmaddy's packed marina. It was an epic in ways few had considered, but an epic nonetheless.

Most regattas are run by yacht clubs or sailing organisations - the St Kilda Challenge, however, was run not only be sailing experts, but by a whole community. A community which had a vision many years ago and has worked tirelessly to bring it to fruition. The committee vessel was local fishing boat Harmony. The 'guard ship' for the starting line was Leverburgh Lifeboat.

The shoreside events explored the rich cultural heritage of the area and produced a festival to remember. Born and brought up on North Uist, internationally acclaimed Julie Fowlis was proud to return to her roots at the weekend giving a fabulous concert treat. There were plays and films, there was music and food. There were friendships renewed and new ones forged.

It was, plainly put, a success.

"We are exhausted but thrilled," said Comann Na Mara chairman Gus MacAulay. "The intention is to make this a biennial event, so we will start planning for 2018 shortly.

"In the meantime, though, we know that we have done a good job because the participants have told us so. After so long waiting for this to happen, just to hear that everyone enjoyed it has made it all worthwhile.

"There was great camaraderie among the sailors and a tremendous buzz on North Uist. We simply could not have asked for more and I would like to thank all those who helped and collaborated to make it happen."

The challenge brought the windswept St Kilda island group into focus - helping to highlight the UK's only dual World Heritage Site, recognised for both its natural and cultural significance, in what will be the 30th anniversary of it receiving its designation in 1986.

But perhaps the greatest achievement of the St Kilda Challenge was for a small community in what cannot be described as anything other than a remote area, to pull together a dream so fascinating that the rest of the country (and a few more besides) wanted to join them.

Looking down on the flotilla in Village Bay on Hirta, St Kilda (R Vejar) 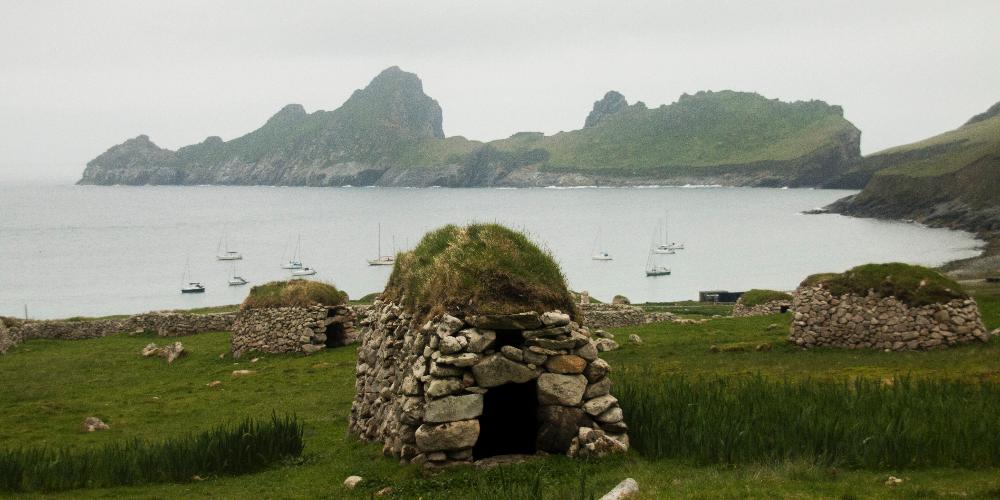 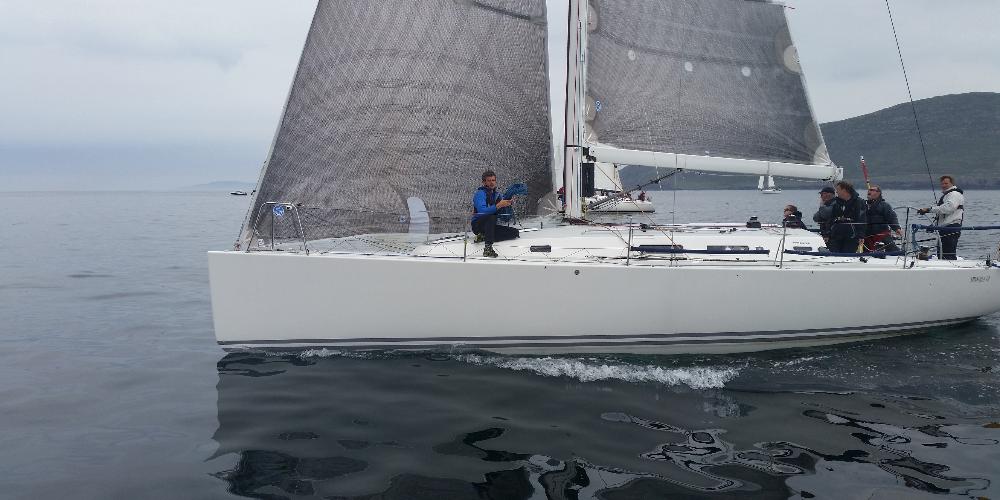 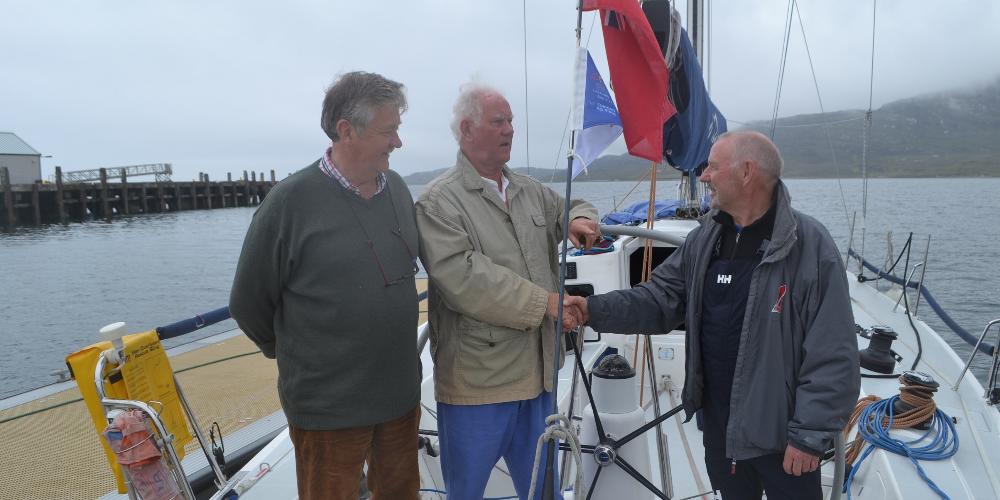