Caledonian MacBrayne is on track to meet its own greenhouse gas emissions reduction target. 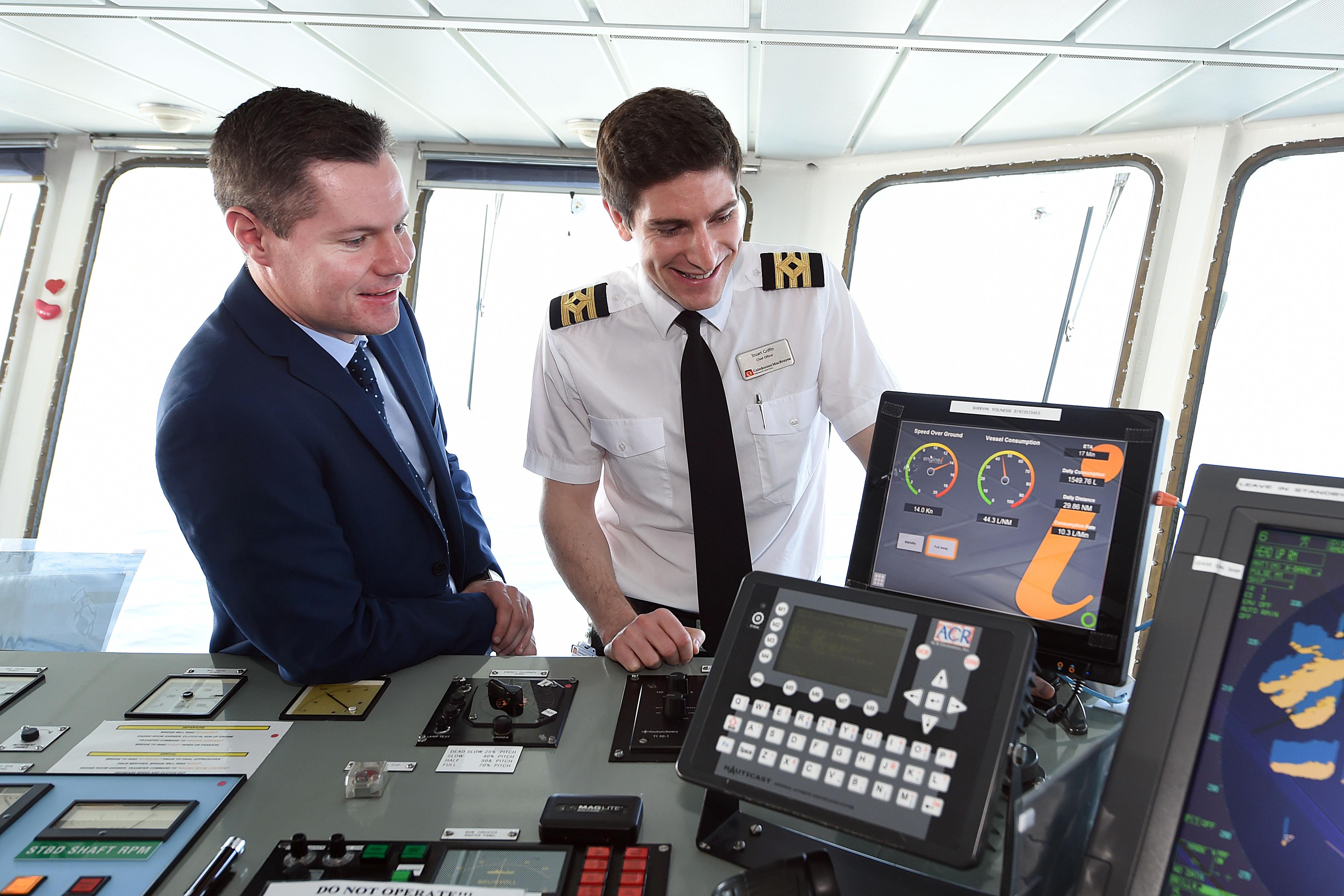 CalMac's target to cut CO2 emissions by two per cent equates to some 1,800 tonnes, which is equivalent to the annual greenhouse gas emissions of 4,285,714 miles driven by an average passenger car, or 645 tonnes of waste sent to landfill.

Innovative, state-of-the-art  fuel management systems have been fitted across the company's entire large vessel fleet - the first ferry company in the UK to do so -  as part of Project Ecoship, allowing both the master and chief engineer to make small adjustments in real time to reduce fuel consumption.

These minor tweaks, whilst not affecting the delivery of the timetable, have shown encouraging results with the company's two per cent reduction target looking highly likely.

It has encouraged increased close working between the bridge and engineering crews and has also opened up collaborative dialogue across the fleet with staff exchanging ideas and tips.

"We are finding some encouraging results," said Drew Collier, CalMac's Operations Director. "While it is too early to reveal any kind of scientifically concrete data, the initial figures we are seeing, as well as the anecdotal feedback from the teams on board, are optimistic.

"Our target is to make a two per cent reduction in our release of carbon dioxide into the atmosphere. At the moment, we are confident that we are on track to achieve this and, importantly, we now have the technology in place to make accurate measurement.

"Whilst the effect of carbon dioxide and other greenhouse gases and pollutants on air quality are well known, what is perhaps less known is that carbon dioxide is linked to acidification within our seas.

"We are very keen to ensure that our ferries help to preserve Scotland's marine environment in so far as possible and we are determined to work towards better and better solutions."

Ocean acidification could have significant impact on both fisheries and sensitive marine life, causing damage not only to fish and shellfish stocks, but also to cold-water corals, like those found within the Mingulay Reef Complex in the Western Isles.

During a routine crossing from Ardrossan to Brodick on the Isle of Arran, Minister for Transport and Islands Derek Mackay said: "I am pleased to get a chance to see this state-of-the-art technology in action first hand.

"It brings clear environmental benefits, cutting the carbon footprint in some of Scotland's most striking coastlines and sensitive marine environments."

The first of CalMac's ships to have a fuel management system fitted was MV Caledonian Isles and she has now been operating with it for some seven months. The company considers that it is still in a bedding-in phase, with on-going learning by the crew and software updates being made.

Installed at a cost of £450k, the 10 fuel management systems, produced by Royston enginei, will, if the targets are met, pay for themselves within a single year.

Minister for Transport and Islands Derek Mackay MSP hears about the company's efforts to play a full role in greenhouse gas emissions reduction. He joined Chief Officer Stuart Griffin on the bridge of Isle of Arran ferry, MV Caledonian Isles, to find out more