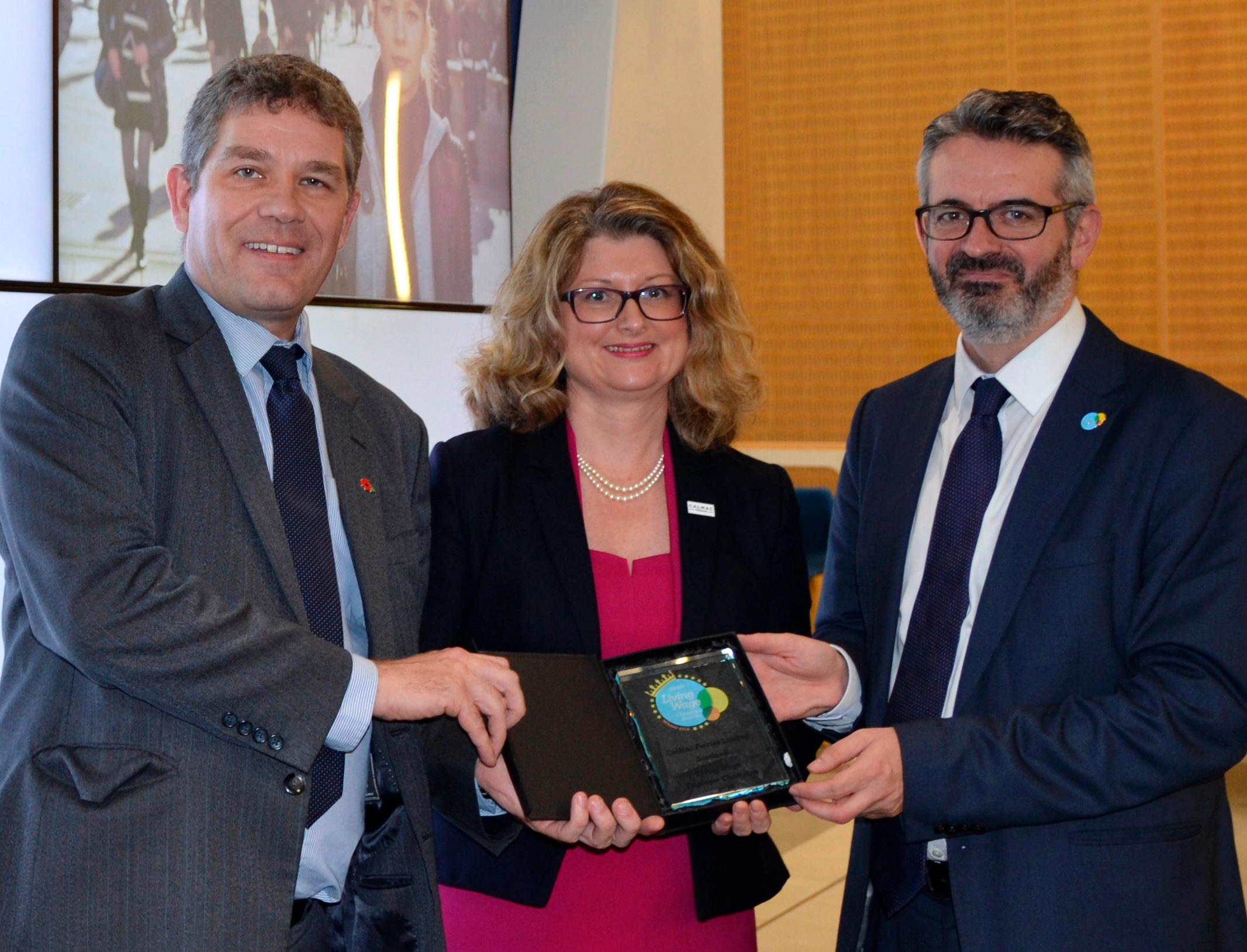 Indeed, CalMac remains the only UK ferry operator with Living Wage accreditation, which was earned by David MacBrayne Ltd - CalMac's holding company - and extends to all areas of the business, including Argyll Ferries; a total of some 1,500 staff.

More than 600 companies and organisations in Scotland are Living Wage Foundation accredited, making up 3,000 employers across the UK as a whole. Only 27 of these are transport related.

The award was presented at the Living Wage Expo Conference in Glasgow by Director of The Poverty Alliance, Peter Kelly, and was received on behalf of David MacBrayne by CalMac's Managing Director Martin Dorchester.

"We are extremely proud to receive this award," said Martin. "Gaining Living Wage Foundation accreditation was very important to us. We already prided ourselves on paying more than the Living Wage across the board, but the accreditation was and, indeed, remains a long term commitment to our staff.

"We have led the way in our own industry and we hope that others will choose to follow. For us it was quite simply the right thing to do. It is absolutely appropriate that staff who work hard for the company and show immense loyalty should be afforded the dignity of living well.

"Our support for the real Living Wage also underlines our commitment, in a broader sense, to some of the UK's most economically fragile areas and communities, with the offer of good and well-rewarded careers."

The Minister for Employability and Training, Jamie Hepburn, said: "I would like to congratulate CalMac on becoming the Scottish Living Wage Champion for 2016. The Scottish Government has long championed the payment of the real Living Wage, recognising the big difference it can make to the lives of people working in Scotland.

"It is not only the 80% of employees in Scotland who are now paid at least the Living Wage which gain, but also the many businesses, like CalMac, who benefit through better staff morale and increased productivity. Investing in your workforce through the Living Wage is the right thing to do and it makes good business sense."

The awards celebrate organisations which have done the most to implement, promote and celebrate the Living Wage in their area. Judges looked for evidence that those considered for the award had gone above and beyond to promote the real Living Wage, as well as to let the public know about their own achievements. Living Wage accreditation is managed by The Poverty Alliance in Scotland.

An independent report last year by the Fraser of Allander Institute at the University of Strathclyde found that CalMac staff members have an average of 13.6 years' service each and that they earn around 12 per cent above the national Scottish average - an indicator of the fact that, for many years, the dignity afforded by a good wage has had a direct correlation with high staff retention and loyalty

The Poverty Alliance's Peter Kelly said: "Congratulations to CalMac on being named the 2016 Living Wage Champion Award winner in Scotland.

"They beat a tough field and the judges were impressed with the range of activities the company undertook over the year. CalMac are one of over 600 Living Wage accredited employers across Scotland.

"We know employers are some of the best ambassadors for the benefits of the real Living Wage and how it impacts positively in the lives of families and communities."

Accreditation involves rigorous interrogation of a company or organisation's pay structure both to its own employees and any contracted workers. It also required the David MacBrayne group to prove that this higher pay commitment was extended to regular contractors, who must also comply.

All employers are expected to pay the UK government's National Living Wage (NLW) - effectively an increase and renaming of the minimum wage - which was introduced in April this year. It guarantees that those aged 25 and over must receive a minimum of £7.20 an hour. People under 25 will still receive the lower minimum wage.

But CalMac, along with 600+ other Scottish companies and a total of around 3,000 across the UK, is one of those going above and beyond any basic statutory commitment by signing up to the Living Wage Foundation's higher rates - also known as the Real Living Wage.